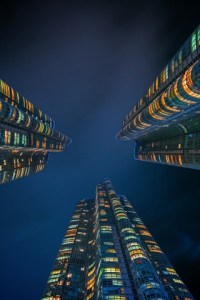 I suffer from acrophobia, the fear of heights. I can be on the top floor of a skyscraper surrounded by concrete walls (and more importantly standing on a floor) thicker than the crust of the earth, and still not go anywhere near a window. Don’t get me started about what it was like standing on the middle tier of the Eiffel Tower in Paris. That open-air monstrosity with its grill flooring caused me to be frozen next to the elevator desperately waiting for it to take me back to ground level.

I don’t know why I have this fear. I don’t recall ever having a traumatic experience from say, falling out of a tree, or tripping on a ledge and tumble-weeding down the side of a hill. According to Wikipedia, researchers have argued that this fear could be inborn, and that a fear of heights is an instinct found in many mammals. Thus not technically a phobia, but a natural instinct for self-preservation.

Regardless, it made me think how much we compete with our own minds.

“Watch out! You’re twenty stories up, one misstep and you will be hot sauce all over the pavement,” says my brain.

“But I’m surrounded by walls that weren’t made by the first little pig, and these reinforced, double-glazed windows look thick enough to stop bullets. I’m pretty sure the third little pig would approve,” I say to my brain logically.

“Look down. See those tiny specks that look like ants? See how far you can fall? Do you really believe that this building couldn’t collapse by some design flaw, or material weakness at any moment? It’ll be the house of straw all over again,” says my brain illogically.

“The odds are incredibly unlikely,” I counter feebly.

My legs turn to jelly. “Yeah, you’re right! Let’s get out of here! Where’s the nearest exit?”

“That way and take the fire stairs! Do I need to remind you of the risk of elevators?”

This is the type of exchange, usually minus any reference to the three little pigs (I added that in a lame attempt for comic effect), leads me to a state of unease that can quickly turn into genuine fear and ruining any chance of me enjoying high-rise views.

I remember watching Mission Impossible: Ghost Protocol starring Tom Cruise, and the scene where he scales up the Burj Khalifa (the world’s tallest building at the time of this blog at a ridiculous 829.8 meters) in Dubai actually had my palms sweaty and my heart pumping uncontrollably. All the while a tiny voice was saying to me, “It’s a movie moron, you’re not actually climbing the Burj Khalifa with faulty electronic suction cups.”

As a person who is passionate about writing, I have encountered others who desire to tell a story but are afraid to write. I ask them why, and their response ranges from thinking they can’t write to not wanting to be judged on what they write.

At the same time, they still have stories that they would love to put down on paper. Just like how I still love admiring fantastic landscapes from on high, but the fear prevents them as it does for me with heights.

This led me to discover that there is a phobia associated with writing called scriptophobia.  This phobia is the extreme fear of writing in public and is tied to the fear of rejection, criticism, ridicule, or embarrassment.

I understand this, but there is an interesting nuance here. It’s tied to the fear of judgement, and that judgement not being positive in some form.

So how do I overcome this creative struggle? The writer’s doubt? For me, I remind myself of three steps.

Step 1 – I write for myself. Not others.

I write what I’m interested in, not what I think others will be interested in. If I write for myself then I can judge my own work.

Step 2 – There is an audience for everyone.

It’s then overcoming the fear of your work being judged by others. There’s no magical formula for this. Regardless, if you self-publish or publish through a publishing company, your work will be judged by others. If you want to share your story, but you fear the potential rejection or criticism then remember this, the world is estimated to be at 7.6 billion people at the beginning of this year, the odds are that a percentage of that population will enjoy your story. Even if it’s only 0.01% of the entire population that enjoys your story, that’s still 760,000 people. To me that’s an accomplishment to be positive about.

It should be noted that if you fear that your book won’t win a Pulitzer, embraced by the masses, turned into a movie, and a flood of royalties come to your doorstep then we’re no longer talking about scriptophobia but a social anxiety that is on a different scale.

And remember that not every book out there is “To Kill A Mockingbird” or “War and Peace”. There’s plenty of literature that critics despise but they still sell.

Step 3. Failing does not make you a failure.

Learn from mistakes, hone your craft, and embrace the grind. If your passion is writing then like any passion, you work at it.

Michael Jordan didn’t fear failure. He embraced failure and he spent countless hours practising shooting a ball in a basket. Prior to winning his first championship, he was criticised as being a selfish player not a team player, criticised for not playing defence, and criticised for being too hard on his teammates. Did he let this criticism turn into a fear that froze him? Did it transform into the fear monster causing him to give up the sport? No, he worked and became defensive player of the year, trusted his teammates (even with game winning shots) and eventually won six championships.

Ed Sheerhan isn’t selling out concerts and packing stadiums because he feared rejection or criticism. He also wasn’t born a gifted musician. He busked on streets, played in pubs, practised countless hours over more than a decade before achieving success.

They started with step 1 above in order to overcome their fear. They did it for themselves. Michael Jordan played basketball because he loved the game, Ed Sheerhan played the guitar because he loves music, and I write because I love writing. You start there, you embrace the grind, you work at mistakes in increments, you get better, and before long that monster that we call fear is nothing but a figment of your imagination.

View all posts by jcenno